Johnny Sexton says it is a “very, very special day for everyone” in Ireland after they beat the All Blacks in New Zealand for the first time.

Ireland ran out ultimately comfortable winners against their 14-man hosts to set up a series decider in Wellington next Saturday.

“Any time you create a little bit of history, it means a lot,” said Sexton.

“We talk about it a lot… about making people at home feel very proud of us. It’s right at the top of our list.”

Having taken the lead through Andrew Porter’s third-minute try, Ireland did not trail at Dunedin’s Forsyth Barr Stadium as they delivered a stylish 80-minute performance to keep the series alive.

Having been soundly defeated in last week’s opening Test, the visitors bounced back with a far more complete display against a New Zealand side who appeared unable to keep their discipline in check.

Sexton, who came off late in the second half with a knee injury, said he will be good to go for next week’s final Test.

But Ireland will be without centre Garry Ringrose who has been ruled out with a head injury sustained in a collision that saw New Zealand prop Angus Ta’avao red carded.

The All Blacks also had two players sent off in the first half, but went into the interval just three points down despite being on the back foot for the majority of the half.

“We didn’t get the reward for the effort we put in last week. We reproduced the same effort again this week and it was touch and go,” Sexton said.

“At half-time, I thought ‘Oh my god!’ But the reaction in the second-half was superb. To bounce back like we did was great. We stayed in the moment.

“It was by no means a perfect performance. We feel that we could have played better in parts, but look, it’s a very special day.”

‘It’s a privilege to be here’

Ireland have won four of the last seven meetings against New Zealand, having never beaten them before 2016.

The comprehensive fashion in which Saturday’s win in Dunedin was delivered underlined the confidence Andy Farrell’s side have built over the last 18 months, as they broke new ground without offering the All Blacks a late route back into the game.

“It’s a privilege to be here and witness what we just witnessed, with the boys going toe-to-toe and being so courageous from minute one,” Farrel reflected.

“They come over here and know that there is a piece of history for them in their careers. We talk about it to them: ‘Somebody’s going to do it sometime soon and it might as well be you.’

“They keep turning up and breaking their little records and I’m so proud of them. They’ve earned the right for next week to go into a decider.” 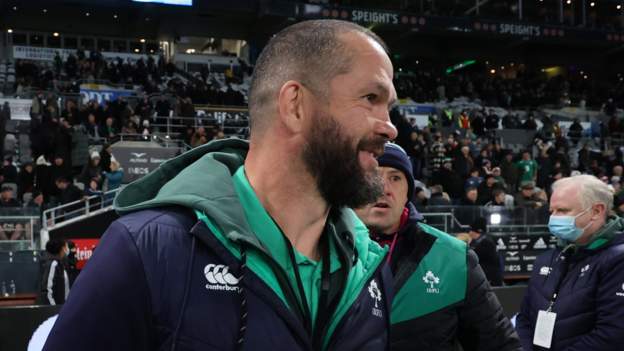