Former Harlequins wing Ugo Monye says he would be “staggered” if England captain Owen Farrell is banned for the start of the Six Nations next month.

England begin their campaign at home against Scotland on 4 February and face Italy at Twickenham eight days later.

“I reckon it’ll be a four-week ban which is halved,” ex-England wing Monye said on Rugby Union Weekly.

“I’d be staggered if Owen Farrell is unavailable for the first game of the Six Nations.

Farrell, who has won 101 caps for England, was cited for a tackle on Gloucester player Jack Clement on Friday which made contact with his opponent’s head.

A top-end offence carries a a 10-week starting point but should the incident be seen as a mid-range offence a starting point for a ban would be six weeks, with the possibility of it being reduced with mitigation.

Farrell admitted a top-end offence in September 2020 when he was banned for five weeks for a dangerous tackle on Charlie Atkinson in a game against Wasps.

“Yes he’s got previous, but that was two years ago and I reckon he’s probably made 150 tackles since then,” added former Harlequins player Monye, who won 14 caps for England between 2008 and 2012.

“He’s got this one wrong. I think it’s a mid-range incident.

“There’s clear direct contact with the head in my opinion. If I was on commentary I’d say that was a red-card offence.”

“I’m pretty sure he’ll go in with a guilty plea because he knows probably that he got away with one,” Care said. 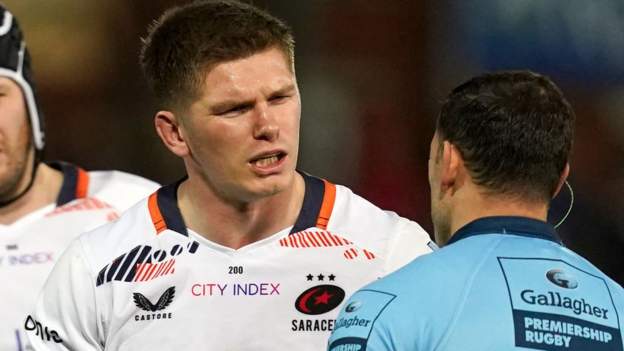