“My nephew is Under-13, playing county [GAA} and they have a nutrition seminar. That’s Under-13s. This is senior provincial rugby.”

Grace Davitt was coming to the end of an impassioned analysis of the perennial problems surrounding the Ulster women’s team when she made the comparison to the scope of preparation carried out by her nephew’s GAA team.

There was an element of tongue-in-cheek, perhaps, but the former Ireland and Ulster centre was deadly serious when detailing reasons for – and potential solutions to – the crisis which has now seen the team go a remarkable 11 years without a victory.

Saturday’s crushing 43-0 defeat at home by Leinster ended another dismal Interpro Series for Ulster in which they conceded 102 points in their three outings, with all of the 19 points they scored coming in a 25-19 loss at home to Connacht.

Some hope for a better future for the women’s game was provided just last week when it was announced that the UK government’s Levelling Up Fund had allocated a £5.1m grant for 20 Ulster rugby clubs, aimed at increasing women’s participation in the sport and at improving the standard of female changing rooms.

How to turn around the team’s fortunes is a topic which has attracted significant commentary. BBC Sport NI looks at five areas highlighted by Davitt, who played in three World Cups for Ireland, as integral to solving the crisis that has gripped Ulster women’s rugby.

Get to work in the schools

Asked on Sportsound Extra Time how she would spend £5m to improve the women’s game, Davitt immediately turned to work that she believes needs to be done throughout schools.

“I would go into schools. If you had a top boys’ rugby school and you tried to bring in soccer or gaelic, they would say ‘no, we don’t want the competition’,” she said.

“You see that with schools. They do not want their hockey players taken away to be playing rugby. The mindset is girls might get hurt playing rugby.

“I would have development officers going in there and supporting the schools and educating them in how girls play rugby, and [explaining] that you’re not taking from the elite athletes that they have.

“Instead, you’re developing your front five, your hookers, the smaller players that maybe don’t feel confident in hockey and finding a niche for them.”

Davitt also stressed the importance of improving the Ulster club structure, something that she believes needs significantly enhanced as it ultimately should be helping provide players for the senior Ulster provincial team.

“Six of those starting Ulster players play in Leinster. That’s another crucial point, how can we continue to develop our Ulster team and our Ulster clubs when our provincial players are playing in another province? How do we get the likes of Vicky Irwin, Neve Jones and the girls playing in Dublin to come back to Ulster?

“That has to come down to that club structure, getting high-level coaches within those teams. You give them the support structures and the committees.

“One of the biggest things of the IRFU review of club rugby and women’s rugby was that female players didn’t feel valued. If you are somewhere where you don’t feel valued, you are not going to want to stay. You’re put to the back pitches.

“I feel some clubs just tick a box to get a women’s team that they can play AIL but they actually don’t support it. It’s getting that funding from Ulster. We see such a disparity between the different provinces of what that looks like.”

Provide more support for the Ulster team behind the scenes

This is where the point Davitt made about her 13-year-old nephew attending nutrition seminars is relevant, in that she feels there is not enough support and resources provided to Ulster players and coaches to help them improve areas such as preparation and training methods.

She is adamant that the players and coaches are trying as hard as they can, but that they need more help.

“I just question the amount of support they are getting behind the scenes. Not just within these three matches but it comes down to their preparation, strength and conditioning, fitness, nutrition and skills. All that has to be developed over a number of years,” she remarked.

“I think Leinster next year are going to have a full-time S&C coach just managing the women’s team. That is not even coming from the IRFU. That’s coming from Leinster backing their women’s rugby and I think we need to start seeing that within Ulster.”

An 11-year run without a win has obvious impacts on squad morale and confidence, that goes without saying. For Davitt, though, work needs to be done to create an environment where positivity can grow.

“It’s really hard for your mental health to keep pushing through and hoping ‘this year’,” she said.

“We see it with teams getting that monkey off their back and getting that win. We see the likes of Munster and, even though their backs are against the wall against Leinster, they get the win.

“We need to create an environment, whether it’s through skills sessions or weekly clubs being developed, and S&C fitness tests. The more decent players we provide into that network, then the more competition and the more standards are driven, then everyone improves.

“At the minute, we don’t have that. People aren’t wanting to be there.”

Don’t brush problems under the carpet

It’s a smaller point, but Davitt also stressed the importance of not shying away from the problems and, in particular, of the media shining a light on the issues as this can help with the turnaround.

“If we brush under the carpet where our failings are, we’ll never fix them. Whereas, if we put it in the spotlight then we can look at what do we need to do.” 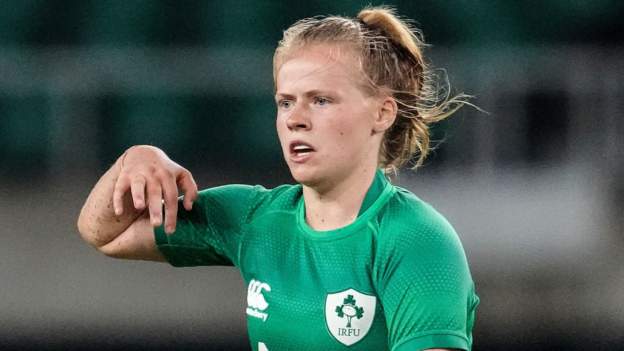